Arizona is one of the best places in the world to ride a motorcycle, with its beautiful scenery, great weather, and well-maintained roads. Riding is much safer if you know the rules, though. In Arizona, all you need to do to operate a motorcycle legally is add a motorcycle endorsement by passing a vision test, a skills test, and a written test, and then pay a fee.

Even though the knowledge assessment is important, the test administered by the Motor Vehicle Division isn’t designed to keep people off the road. The amount of information drivers study has to be limited to a reasonable amount. Considering the almost endless number of variations you could encounter, it isn’t surprising that drivers don’t know them all. That is why you may not have heard of lane splitting, or understand the Arizona laws regarding it.

What Is Lane Splitting?

Motorcycles don’t take up as much room as cars and other motor vehicles, and sometimes riders take advantage of that when parking and riding. Your motorcycle will fit into a space smaller than that needed by other vehicles, so you may be tempted to park in spaces not really designated for parking, or take advantage of your small size to fit through gaps in back-ups to get out of a traffic jam. 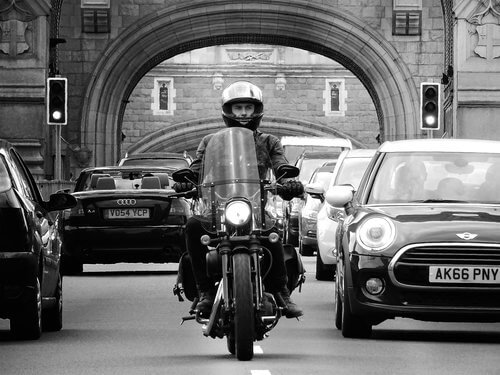 Arizona Law 28-903 states that anyone operating a motorcycle is entitled to the use of the full lane, but that motorcyclists can’t overtake and pass in the same lane as another vehicle. Arizona law also specifically prohibits traveling between lanes of vehicles, or between adjacent rows of vehicles. This section also orders riders not to ride more than two abreast if there isn’t another lane, no matter how much space they actually take up. The only exceptions to these rules are for law enforcement in the performance of their duties.

The long and the short of it is that motorcycles are expected to use space the same basic way cars do. If two cars couldn’t fit into the same space, your motorcycle isn’t supposed to try to maneuver there.

Even though it’s still in discussion, the legislature in Arizona has been considering potential changes in the lane-splitting laws. Some proponents of changing the law say changing the existing law could make riding safer for motorcyclists and car riders.

One of the biggest problems with motorcycles is their size, and allowing them to ride together, side by side could make them more visible. Motorcyclists also believe that allowing lane splitting would give them more flexibility, so they can get out of dangerous situations where other drivers don’t see them. They want the extra maneuverability that lane splitting allows to avoid dangerous situations. One rider described motorcyclists as “sitting ducks,” because he believes the lane-splitting rules don’t let them take evasive actions.

Berkeley has already studied the issue and found that lane splitting can be done safely as long as the speeds are kept relatively low. In California, the law was changed to allow lane splitting, at least partly to help with traffic congestion.

Researchers discovered that it was most dangerous when the motorcycle speed was very different from the rest of the traffic. Another important finding was that lane splitters were less likely to suffer serious injuries, such as to the head or torso, or even die. So there are places where lane splitting is already legal, and this might be true for Arizona in the future. For now, though, it is a citable offense in Arizona.

Why Lane Splitting Is Dangerous

Anyone on a motorcycle is more vulnerable than someone in a car or truck. There is no steel shell, with seatbelts and surrounding airbags, to keep you safe if there is an accident. Common causes of accidents include speeding, stopping suddenly, or making unsafe lane changes. Lane splitting is another important source of accidents. 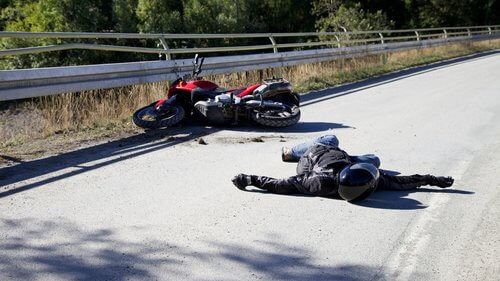 The American Motorcyclist Association is working to make lane splitting legal in more locations. They say that the practice not only helps other drivers by cutting down on congestion but that it is safer for motorcyclists. This is one area of law that might change if when there is more data from places that have legalized it.

When You Should Never Lane Split

There are some conditions under which it is clear that you should never do this. Among them are:

Have You Been Involved in an Accident That Involved Lane Splitting, or Charged for It?

Skousen, Gulbrandsen & Patience, PLC has been successfully assisting clients for 60 years. We have experience in a wide variety of cases, and our specialties include Serious Injuries, Wrongful Death, Criminal/DUI, and Motorcycle Accidents. We have also helped clients who have been involved in lane splitting incidents.

Our personal injury law firm is located in Mesa, AZ, and we strive to meet the same standard of excellence in every case. We treat every case with equal importance, striving to reach the best result. SGP Law assists clients throughout the Phoenix metropolitan area who have a need for our services.