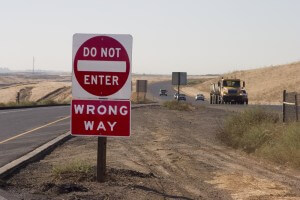 Lately, there has been a lot of media coverage regarding wrong-way drivers in Arizona, with many people questioning how these drivers continue to travel the wrong way without realizing it. Unfortunately, the majority of wrong-way auto accidents typically involve impaired drivers, which puts others on the roadway at risk of serious injuries or fatalities.

Wrong-way driving is when a driver is driving towards oncoming traffic in the flow of traffic lanes. How does this happen? Two writers from The Republic, Jackee Coe, and Matthew Casey, recently wrote an article that detailed three serious accidents on our valley’s freeways. The accompanying Arizona Department of Transportation (ADOT) statistics stated that 80 vehicular accidents involved wrong-way driving between 2009 and 2011. The article also revealed how this figure has since declined. If this is true, why did Arizona have so many wrong-way collisions this summer?

According to ADOT, a noticeable lack of road signage and other traffic signals may have been to blame. It has also been noted that there are more accidents of this nature than publicized. During the early summer months, ADOT sent out crews to designated areas throughout the valley to help deter and inform any driver that somehow ended up going the opposite way of the traffic flow.

What can YOU do to help?

If you and other drivers call emergency responders, they can track where the driver is to help roadblock them, in an effort to prevent possible auto accidents or fatalities.

KTAR host, Rob Hunter, talked to a DPS officer, who offered some

Additionally, you can avoid being a wrong-way driver in a future incident by never driving while impaired. The state of Arizona offers taxi programs to assist those who want to have fun without feeling the need to drink and drive.

If you are the victim of a vehicle accident, seek the car crash attorneys of Skousen, Gulbrandsen & Patience, PLC to represent you. Our experienced attorneys are well versed in Arizona driving laws and will use them to represent you. Please contact us today!