It’s no secret that driving is one of the most dangerous things we do every day. Yet, for many people, this is rarely a thought that crosses their mind. At SGP Law, we’ve worked on countless car accident-related cases in the decades we’ve been open as a firm. Because of this, safety while driving is always top of mind.

As a reminder to Arizona’s residents of the dangers of driving (and why safe driving habits are so important), we conducted an analysis of Arizona’s most dangerous driving behaviors.

Below is a graphic we created summarizing the data from the study and below that is an explanation of our methodology and the results. 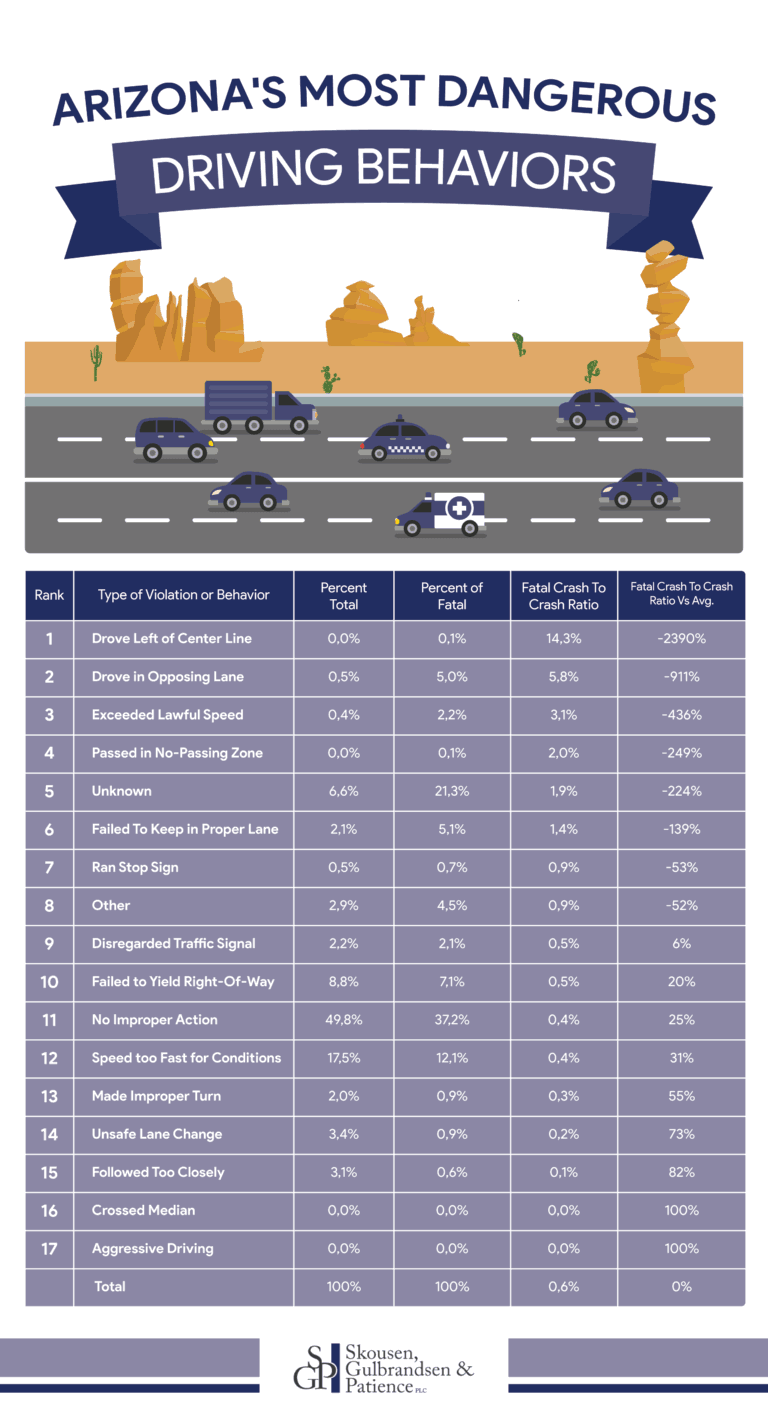 Highlights Of The Study

How Was The Study Conducted?

The Arizona Department of Transportation has publicly available crash data. We used this data as the basis of our analysis. We then calculated our own measures to provide insights into what the most dangerous driving behaviors are in Arizona.

How We Determined What “Dangerous” Meant – Fatal Crash To Crash Ratio

For us, “dangerous” is a ratio of the driving behavior’s fatal crash to crash percentage. This is a measure that shows how often a crash caused by a specific driving behavior is fatal.

In the graphic above, this ratio is titled “Fatal Crash To Crash Ratio.” For example, the driving behavior ranked most dangerous is “Drove Left of Center Line” with a Fatal Crash to Crash Ratio of 14.3%. This means for all the crashes that occurred, 14.3% of them were fatal.

If we look at the driving behavior ranked 2nd (i.e. Drove in Opposing Lane), the Fatal Crash to Crash Ratio Vs Avg is -911%. This means that this driving behavior is 911% more dangerous than the average!

It’s important to note that each crash-related driving behavior occurs at different rates, meaning the sample size is different for each one. When making a comparison versus the average, this could be slightly misleading because the sample may or may not be a valid representation of what would occur if there were a statistically significant number of crashes for each driving behavior.

Other Important Things To Mention About The Data

According to ADOT’s data set, 49.8% of crashes occurred due to no improper action (i.e. no violation or dangerous driving behavior that they were aware of). It’s hard to believe that half of the crashes that occurred were caused by no improper action. We hypothesize that the data here may be slightly misleading because people will often misrepresent what caused an event if it was traumatic.

For example, if you look down at your phone for a brief second and then rear-end someone, it’s impossible for ADOT to know why you rear-ended them unless you admit it (or someone sees you) and it is documented via a police report. We think there is a segment of people in the “No improper action” group where something like this occurred.

Another important thing to note is that there were actually 0 fatal crashes caused by “Crossed Median” or “Aggressive Driving” according to the data. Is this actually true? Maybe, maybe not, but it’s important to note because this heavily affects the Fatal Crash To Crash Ratio.

If you are like most Arizona residents, you drive frequently. Please be safe, stay aware of the road, and avoid participating in any dangerous driving behaviors.

Here’s are some safe driving resources to serve as a reminder of how to stay safe on Arizona’s roads: